The Geology of Words

‘The Geology of Words’ is a two-part sculptural installation that explore notions of the
process of reading. Through the analysis, processing and understanding of information,
words are deconstructed and re-written into new forms of text.  The accumulation of text
over a period of time, transform physical books into geological landscapes that are fossilized
and archived within the mind.  Text reforms itself under creases and folding of papers, which
form Geological reliefs of passing time. The reformation of text through its displacement,
is explored through the layering of stacks of paper, which create different geology of words,
that are overlaid and crushed within the surface pressure of time.  Over time, words and
information that develop into thoughts become obscure. The crystallization of books and pages
create a new visual movement to the displacement of text caused by reading.

‘The Geology of Words’ explore and interact with books and spaces on the shelves of The Ngee Ann
Kongsi library. Focusing on the before and after effects of reading, and the similar archival of information.
The two-part installation consists of dehydrated, layered stacks of paper that form fossilized geological
sediments, and crystallized literature books and pages that form new fossils of words.  The installation
is completed with the books on the shelves and the perception of the viewers. 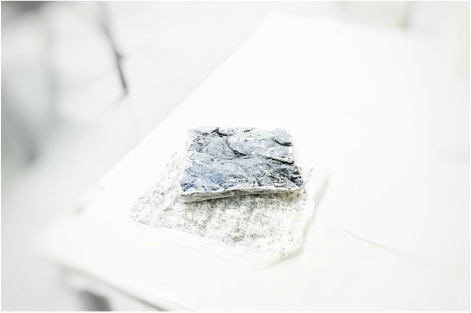 Beneath the Moon, 2015
Acrylic on paper
Dimensions Variable 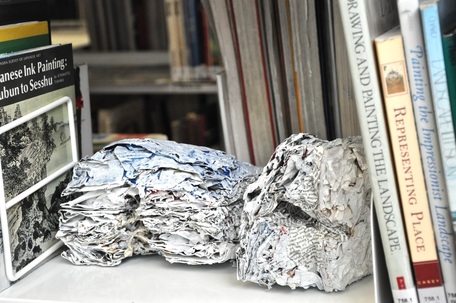 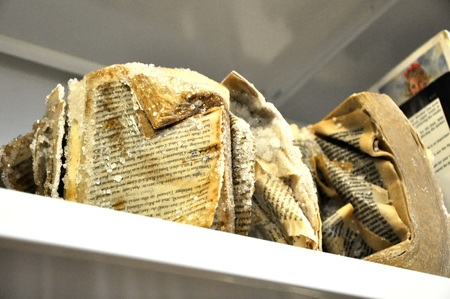 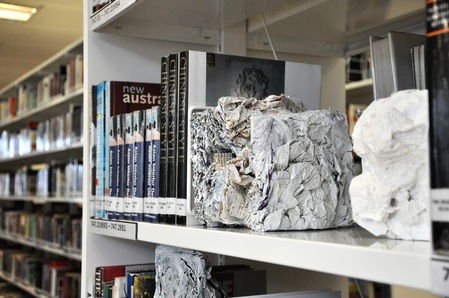 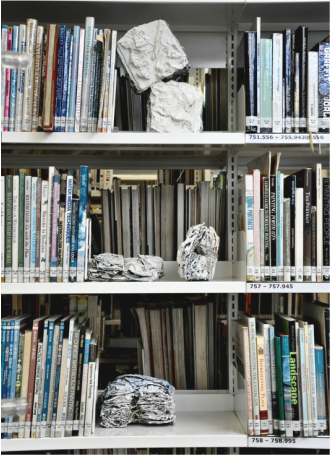 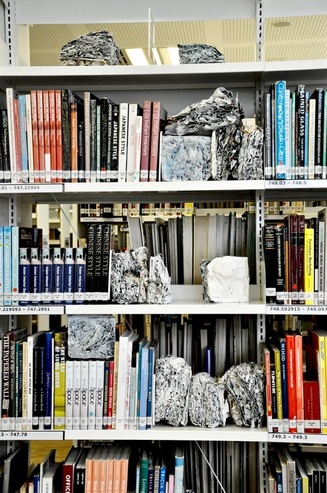 'Dialogue in Time' is a series of sculptural installations that explore the disintegration of memory
through different dimensions in time.  Through the progression of time, memories transform into
obscurity, certain events thus, suffer the process of erasure.  This creates a depth in distance which
is further explored through usage of the colour white.  In this series, white is used as a symbolic
demarcation of distance, erasure and frozen time.  Personal objects relating to childhood events
have been used, as a form of symbolism and representation of the longing and absence; derived
from the revisitation into childhood memories.  These objects contain traces of memories that
have been almost completely or partially forgotten.  This subtle and complete disintegration of
objects and their surfaces explore the impermanence of memory.  The transition of these objects
through various dimensions causes a time lapse within time itself.

'Dialogue in Time' explores in the first half of the series, sequences of different objects and
memories undergoing a lapse in time.  Similar objects placed in containers undergo a  sequence of
time lapse shown through their positioning, which underlines an invisible connection with a physical
force, that causes different movements and reactions of disintegration, in response to the first
initial sequence. 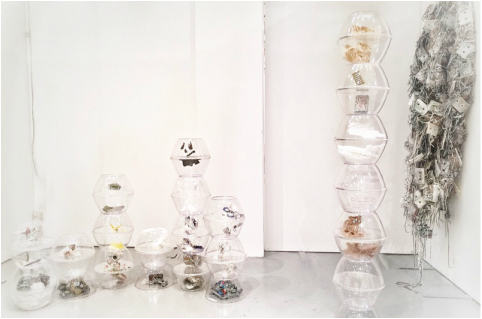 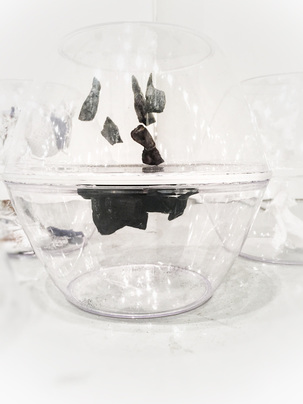 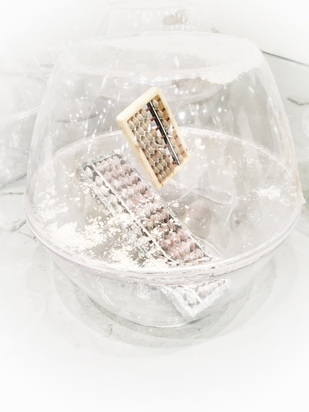 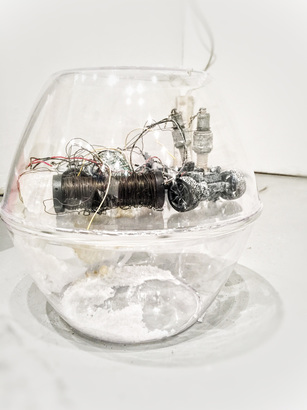 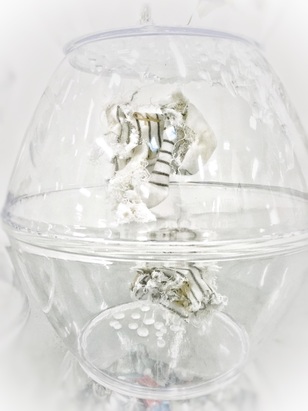 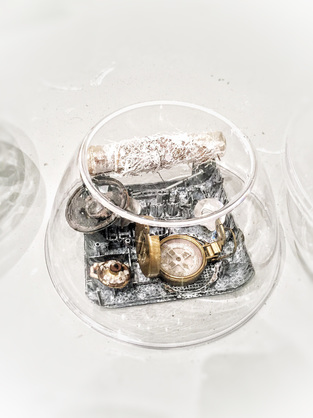 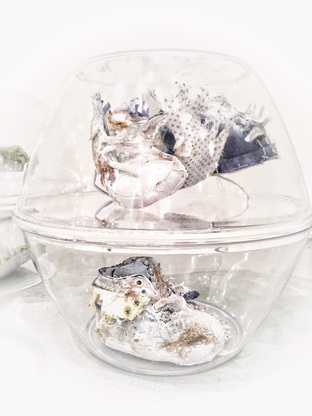 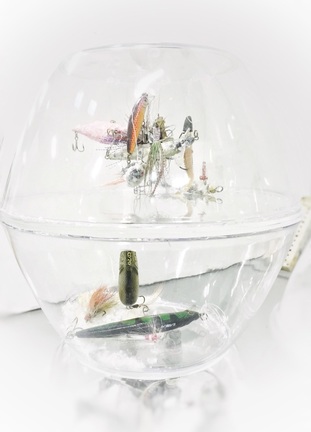 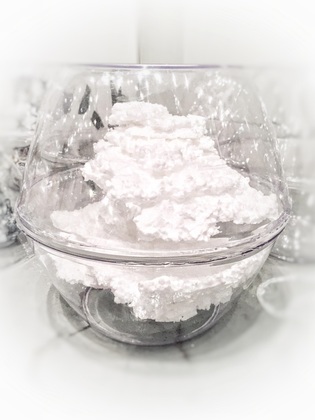 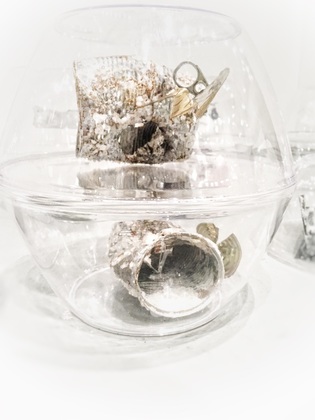 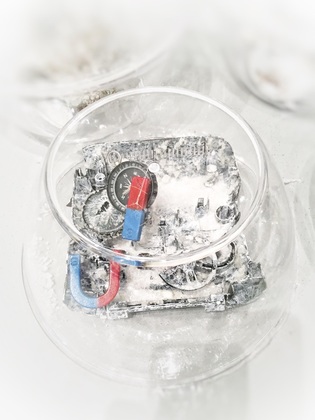 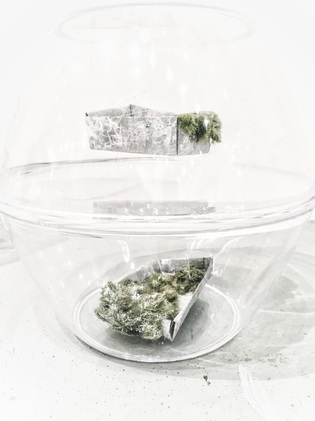 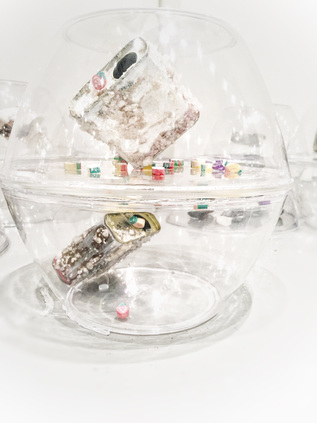 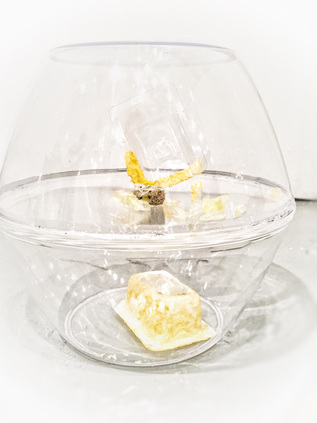 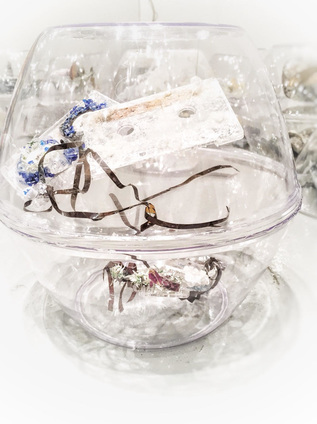 'Dialogue in Time' explores in the second half of the series, cold and unsettling memories of
childhood that disintegrate through dimensional time.  The second half of the series is placed
in a dialogue with the first, accompanied with a piano recording of a piano lesson experienced
at age six, that marked the beginning of trauma experienced from playing the piano.  Having
sectioned into one of the memories tied with the cassette tapes within the container, a hundred
cassette tapes have been weaved into a broken net which, forms the second half of the series.
The cassette tapes used are personal recordings of piano lessons experienced in my younger
years.  The untidy weaving of the tapes and its disintegration act as a form of memory that
begins to corrode and crystallize over time.  This marks the obscuring and erasure of memory.

The memory of playing the piano, similarly passes through various dimensions in time, with
the audio recording acting as the disintegration's lapse in time.  Thus, the recording within
the tapes suffer a time lapse, lingering on. 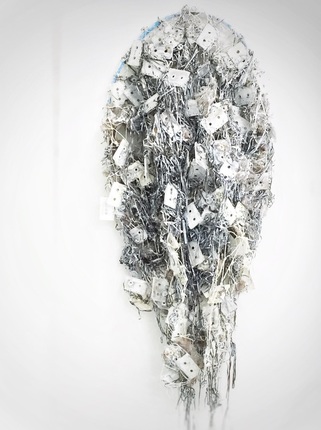